Navigation - how to do it with a drone

First off, I'll apologize for writing a dull and tedious-looking article. But now I have, let's get started.

We're going to imagine we have a drone of unspecified range - possibly enough to go half way around the world. To do that we will need to know several things.

The altitude is a tricky one - the highest mountain in the world is Mount Everest at 29,000 feet or thereabouts. That means that to be truly free of hitting ground based obstacles, a height of 30,000 feet is needed. Because planes use 30,000 feet perhaps a higher altitude so as not to bump into any. That takes us to 35,000 feet or possibly 40,000 feet. That airspace should be relatively free aside from America's U2 spy planes on the way up or down to 60,000 feet.
Being so high really isn't that practical for most purposes. Sure - if the drone is solar-powered or even nuclear powered and aimed at long duration flight for weeks or months then being high has great advantages. For the vast majority of flights, being low has its advantages. For this reason we're going to assume we're flying a drone to deliver aid into a hostile land where cargo planes get shot down.
For a flight like that, staying below radar is a pretty good idea. Thus our altitude will be around 80 feet above the ground. How do we calculate that we are 80 feet above the ground and what do we do about skyscrapers? That's all pretty straightforward. We don't need to stay consistently at 80 feet, we can go higher to skip over obstacles or even just go around them.
Calculating height off the ground has its challenges. An altimeter is good but only calculates height above sea level and is skewed by air pressure changes due to weather. GPS satellites also provide altitude calculations but as before - only altitude above sea level. The world is not level - there are mountains. Thus we need to resort to one of three known methods.
If we relied on GPS for altitude there would be an issue if it was jammed as is likely to happen over hostile territory. Even including Glonass (Russian), Baidu (Chinese) or Gallileo (European) as well as GPS (American) won't help much because the signals are all weak and easy to overwhelm.
Where we left from is a pretty easy thing. That can be keyed in manually or read from GPS. As long as we have that coordinate we are well on the way to navigating. The next step is to know the destination. I'll skip waypoints as it's just a case of treating the last waypoint as the origin position and the next one as the destination.
Knowing where we're coming from and where we're going to are vitally important. We can ignore altitude for now though that will come back into play if we actually built a drone.
To get from the origin to the destination we need to know the direction in which to head. This is calculated using the Haversine method. That gives us the bearing we need:

At the start of the mission it's probably also a good idea to record the difference between magnetic north and true north so that in the event of satellites being unavailable, navigation can be carried out using heading and flight duration versus speed.
Knowing the distance between the start and the finish are very important too. That combined with a flight timer allows us to calculate in the event of no satellites, where to deliver the payload. This is calculated with the Vincenty method. 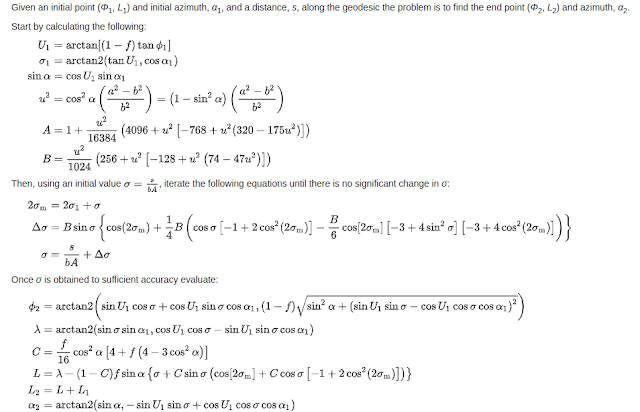 Between two nearly antipodal points, the iterative formula may fail to converge; this will occur when the first guess at λ as computed by the equation above is greater than π in absolute value.
That gives a distance accurate to within 0.5mm between any two points on the earth's surface.

I'll leave it there because your mind is probably reeling right now. At some future point I'll talk about Kalman equations needed to turn an acelerometer from a gaming toy to a serious device that helps a drone fly level.